New item this week: J-Zone – Root for the Villain Book!

A few weeks back a friend put us on to J-Zone’s first book titled Root For The Villain: Rap, Bullshit And A Celebration of Failure when he shared this avclub.com interview with us. Yeah, we are a bit slow to know about the book but great things often take time to circulate and c’mon, we just opened our e-doors on December 27th

J-Zone has been putting it down for years in hip hop doing his own unique thing, travelling the world, performing in front of thousands of adoring fans but it seems all things come to an end one way or another. J-Zone chose his own end in music…as a rapper recording albums and touring. Now he stays busy DJ’ing and writing and in 2011 he released his first book, a memoir of his journey through hip hop and his “Celebration of Failure”.

We emailed J a couple weeks ago after hearing about his book and placed an order immediately. The interview got us excited to read this and help share his words with new fans. He also sent a few CD’s that we are including in a package deal with autographed copies of the book.

It takes courage to write a song, rap on stage, get on a plane and tour in a foreign land and continue year after year. It takes courage to tell your story and have the reader perceive it however they perceive it, whether it be a failure or success. To us, sharing art and pieces of yourself is all success and inspiration.

Here are a few nice things the press said about the book:

“…he has absolutely proved himself with one of the best and most sincere autobiographies Hip Hop has ever witnessed.” – Jake Paine, Hip Hop DX

“Root For The Villain is ultimately a bittersweet meditation on the death of a beautiful dream, but it’s also an intermittently sweet and funny look back at hip-hop’s de-evolution from a man with a unique perspective on how and why it lost its way.” – The Onion AV Club

View the product page and place your order now! 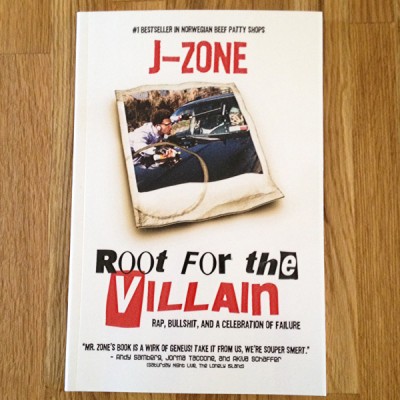