soso – Tinfoil on the Windows [import] 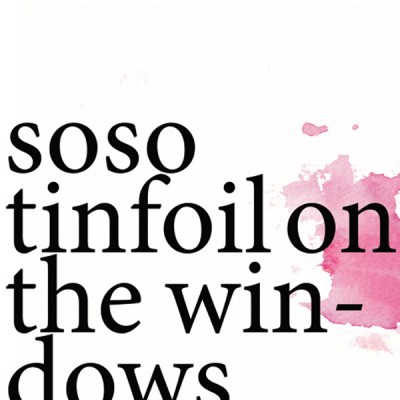 “Soso’s conservational, near-spoken verses sound almost uncomfortably intimate in their close-mic’ed directness and starkly autobiographical themes. Undeniably strange but weirdly compelling, with echoes of everyone from cult Texas weirdo Jandek to shoegazer gods My Bloody Valentine, Tinfoil on the Windows is one of 2007’s most difficult to categorize albums.” – All Music Guide

All The Useless Things These Hands Have Done

Track List
1. Rubber Rings | 2. Company of Chairs | 3. All The Useless Things These Hands Have Done | 4. The Names of all the Trees | 5. Your Mom is in the Next Room | 6. Floorboards and | 7. One Eye Open | 8. For a Girl on a Faraway Hill
Album Credits
Lyrics written and performed by soso.
Music by Maybe Smith.
Additional drum programming on Rubber Rings by Maki, Scott Da Ros & soso.
Produced and mixed by soso and Maybe Smith.
Mastered by J.LaPointe at Archive Mastering.
More Releases
soso & Dj Kutdown – All They Found Was Water at The Bottom of the Sea
soso – Tenth Street and Clarence
soso – Birthday Songs